Well, not really my first. I actually used to run quite a bit in High School. This was more like a return to running; hopefully anyway, otherwise it’ll just be known as that one time I ran after not running in a long time. Still, it felt good and I’d like to do it again.

When I was in High School, I did a lot of things to keep busy. I’ve raced motocross since I was 12 and it was always the priority, especially through High School as I set my sights on racing professionally. However, the house rules were in effect while I was in school, which meant I had to maintain good grades, participate in UIL academic events, and play sports. Generally, I had to be involved at school so I could race on the weekends.

I played basketball, ran track, and ran cross country. I was never great at any of them, but I fared best in cross country. Additionally, it was a great workout for my racing. I remember running miles down country roads before school, then running a few more miles around town after. Sometimes, it was horrible and other times, it was great. For the most part, I enjoyed it and I enjoyed being good at it (to me, running was only fun if I was in shape).

Then, Junior year, at the Regional CC meet, I made it less than a mile into the race. My lower back locked up and I was barely able to walk back to the bus. It was a struggle for several days just to get out of bed. A visit to the doctor and a few X-rays showed a disc in my lower back that had never fully formed and was playing hardball with my sciatic nerve. The only option I was given to “fix” this was to build enough muscle around it to support the disc and ease the pain.

That was the last time I ran any further than the length of a basketball court or the distance from the couch to the fridge during commercials.

Four (five?) years later, I turned 21 and discovered alcohol. I was in college and not racing for money anymore, which meant I was skipping the gym for parties. Over the next five years, I went from 185 lbs of muscle to 215 lbs of Blerch (thanks Oatmeal). Then, as everyone does sometime around graduating college and realizing there is still a life to live, I realized how much better I looked and felt when I was fit. At the end of last year, I decided to change.

I bought a mountain bike, which had been my source of cardio in the years after I quit running, and began riding. I coupled that with a few short stints of P90X and dropped 10 lbs within a couple months. I bought a road bike for something to do when it was muddy and lost another 5 lbs. Then, about 2-3 months ago, the weight stopped coming off and I even gained a few pounds although my cardio continued to improve.

I know a few guys that run and I knew running could help. I remembered what it felt like when it was good. Even when it was bad, I remember I at least felt accomplished. Though I was afraid of hurting my back, I decided to try it again. I read what I could, asked questions, and found my issue all along could have been my lack of proper form while running. I had always run long distance the same way I ran on the basketball court – on my toes, shoulders forward, bent at the waist.

So, I took what advice I had come up with and started slow while focusing on form. Sixty second jog, 90 second walk. Repeat.

Yesterday was my first run in nearly 10 years. Today, I did it again. Thankfully, I had little to no pain in my lower back and, for the first time in a decade, I’m actually excited about running. I have a long way to go to recover what I’ve lost over the last 10 years, but I’m looking forward to getting it back. Additionally, I’m excited I can add running to my arsenal.

My first run (note: apparently, WP doesn’t allow Strava iFrame embeds, so here’s a pic and here’s a LINK to my run): 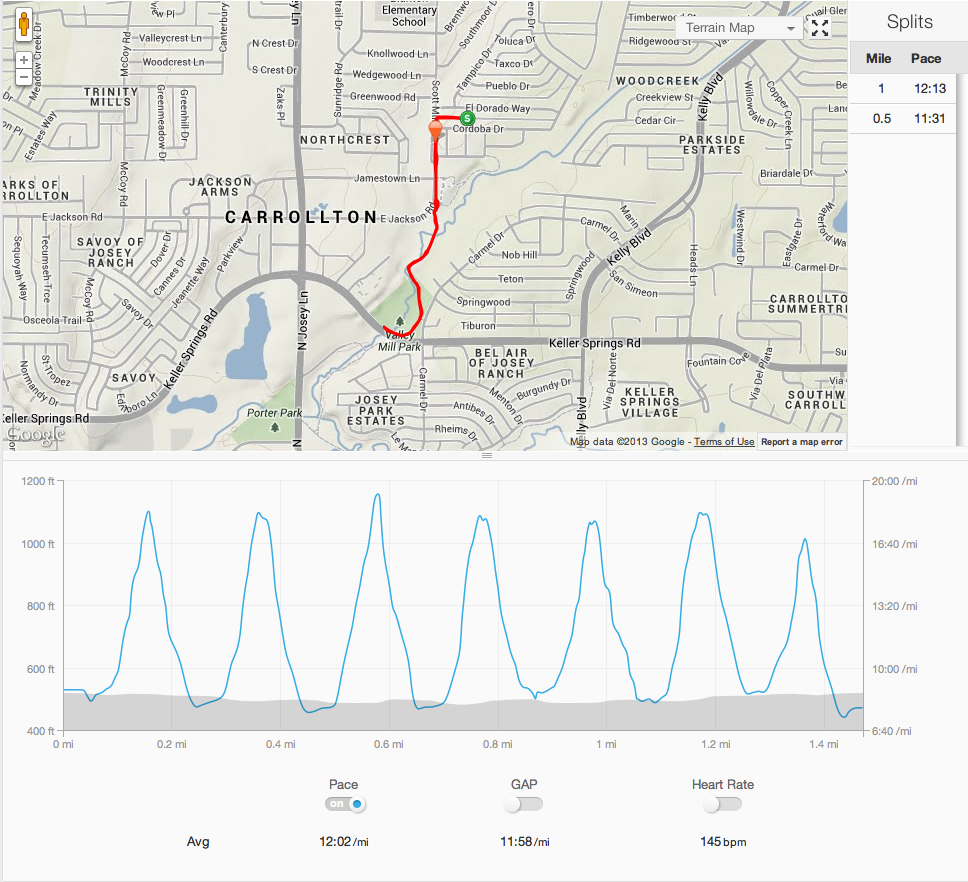 A full list of my activities – road bike, mountain bike, and running.

2 responses to “My First Run”